The Olga Frua collection is a dream come true, a dreamlike vision. Memories, passions and desires are turned into materials, colours and shapes: a true “ars dormiendi” (art of sleeping) to live romantically in the intimacy of the night with the refined elegance of a discreet, sensory, and poetic luxury. An unconcerned dream, to rebalance your energy, rest your body, relax your mind, and soothe your soul: this is the vision of Olga Frua.

Proposing a culture and aesthetics of sleeping = ars dormiendi, that’s ultimately its ambition.

The night is waking up! 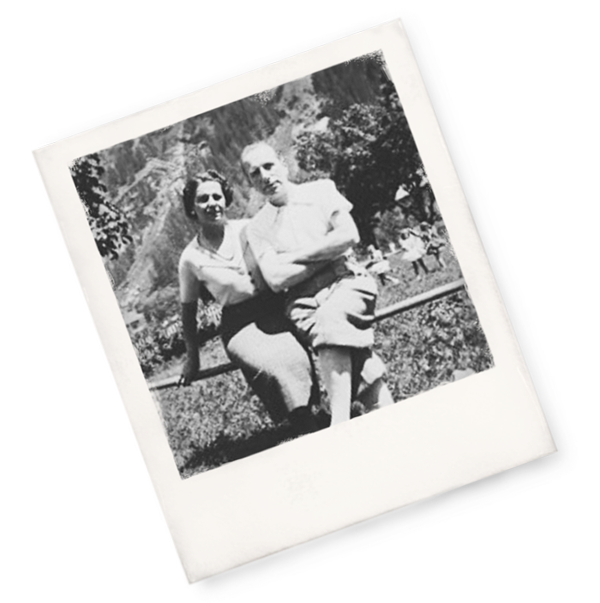 Olga Frua lived in Italy between Milan and Stresa, on Lake Maggiore, in the early decades of the 20th century. One of her passions was linen, especially intended for bedroom. Her handwritten lists as well as the trunks still to be found in the house on the lake, are especially devoted to “sets of sheets”, nightdresses and dressing gowns of linen, cotton, and rib knit fabric. Still today, those simple fabrics, made from natural fibres, resistant and respectful, often hand-embroidered with ajour decorations and monogrammed, evoke a refined, mysteriously timeless, elegance. Olga’s personality inspires a contemporary Nightstyle.

Olga was particularly fond of essential and pure colours: the white of silk, her best-loved colour, dressed up her nights, but also more daring hues, such as Adrianople red and indigo blue, the dyes of the Fabric Printing Workshop De Angeli Frua, where Alberto – Olga’s husband and son of the founder Giuseppe – worked. Alberto Frua was a textile engineer, very experienced in both the weaving, dyeing and printing processes. In those early years of the 20th century colours were usually used for dying fabrics intended for handkerchiefs, but also for women’s “working” dresses. Sometimes, adding a floral, printed design was enough to give a housework apron as well as an evening dress an elegant and romantic touch, softening the sobriety of the time with a taste for refinement. Having a fabric “printer” husband, it was easy for her to love colours.

The beautiful cube-shaped house was built in the early 20th century at the request of Anna De Angeli, Alberto’s mother. Olga and Alberto fell in love with the house, which was then surrounded by huge, lush green meadows and vineyards overlooking the islands of Lake Maggiore. They spent there a very long time together with their family. Not only was the location in a strategic position for the factories of De Angeli Frua in Milan, Legnano and Omegna, but it was also chosen as a holiday residence as well as a meeting place for outstanding personalities of the cultural scene and industrialists of the time. 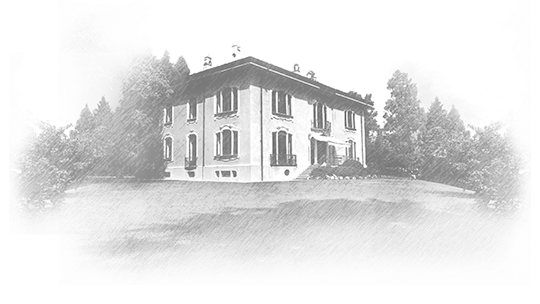 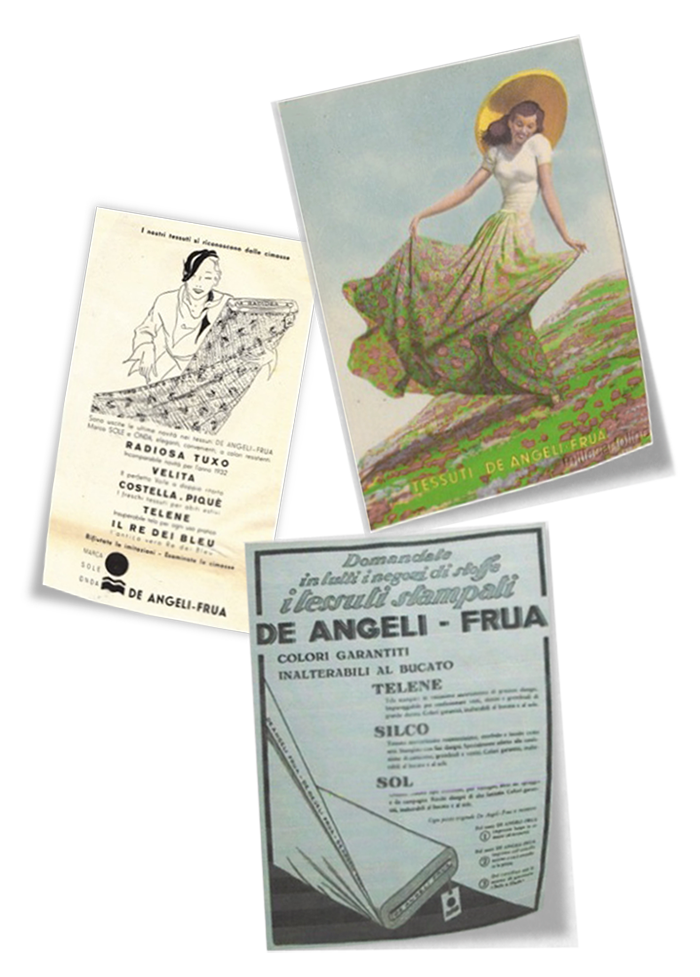 In 1896 the company De Angeli Frua was born. Its founders were Ernesto De Angeli and Giuseppe Frua, and it was originally (mid-19th century) just a small fabric printing workshop dealing with the manufacture of handkerchiefs based in Milan at the “Maddalena”, which then employed ten workers.

Forty years later, in 1937, the company De Angeli Frua was a major industry with five plants in Italy and eleven thousand employees. It had distinguished itself for its excellent production, commercial far-sightedness and deep humanity: actually, after the war it promoted a number of social initiatives, such as the establishment of social security funds and the building of houses, schools and kindergartens for employees and their families.

Vestiges of the prestigious textile company, also known under the name of DAF, which between the two wars adopted the Made in Italy brand as their imperative, succeeding in building a reputation and competing successfully with the English and German printed textiles – which up to that period had been considered of superior quality and consequently were in greater demand compared to the Italian products – have fortunately been preserved until now, including documents, photographs, fabrics, prints and a great memory. The production activities of De Angeli Frua ended, in fact, in the late 60s

In addition to printed handkerchiefs, especially those intended as an imitation of the handkerchiefs manufactured in Glasgow, Glarus and Cologne, an article that allowed for gorgeously successful imitation thanks to the good quality of the fabrics employed, along with the use of bright colours and tasteful and varied patterns, the offer was increased, extending to printed fustian cloth for clothes, indigo blue, white and coloured woollen fabrics, percale fabrics for shirts etc.

The most considerable production was that of female peasant dresses with an indigo blue background, cloth fabrics dyed in Adrianople red, damasks and cotton satins dyed in bright colours intended for upholstery, and dyed faux silk fabrics for parasols and umbrellas. All in all, a total of seven million metres were obtained from five six-colour continuous printing machines, four roller-fed machines for intermittent printing from one to three colours and twenty-five work-benches for hand printing.

In the factory there was an engraving workshop, in which specialised artists worked on cylinders using the best manual systems, with clips and pantograph and by means of electrotyping. 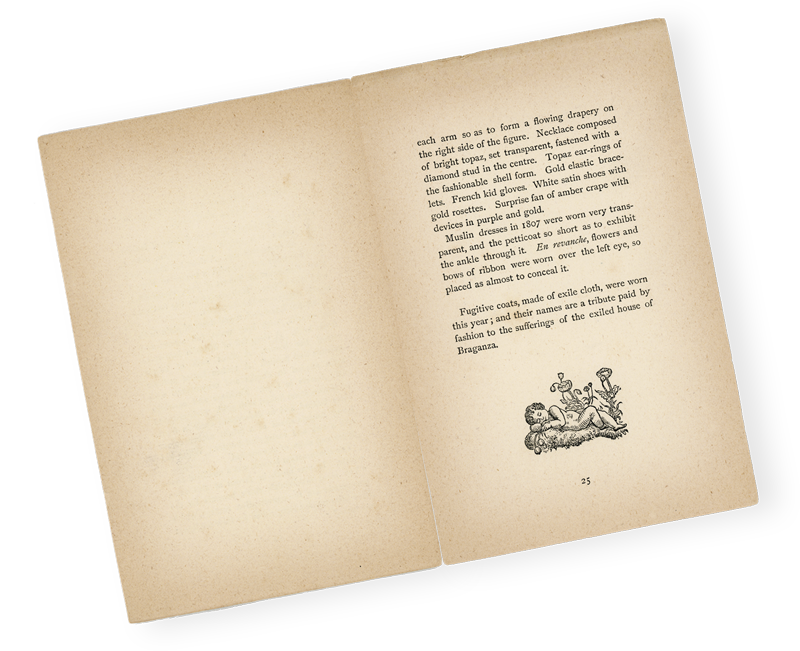 A signature supporting an angel, a putto, an amorino, or just a child sleeping peacefully, his curly head resting on a soft pillow and holding in his hands two wild flowers. Olga’s signature, incomplete, was found on the cover of a of prayer book that belonged to her.

A calligrapher, a real artist, has now managed to rework it, giving it new life.

The “sleeper”, the one who sleeps, is the subject of a drawing found in an English book of women’s fashion from the mid-19th century, also owned by the Frua family. The original illustration shows the baby sleeping smiling on a meadow, surrounded by flowers, among which we can recognise poppies, bellflowers, and lilies of the valley. That dreamy and blissful look in the current logo expresses all the values of the Ars Dormiendi of Olga Frua, namely: lightness, harmony, naturalness, pleasure and care of one’s intimacy.

The Olga Frua Collection has its origins in the excellence of the Italian handicraft heritage, which it revives, combining handmade processes, typical of the trousseau tradition, such as ajour embroidery, with contemporary style, sensibility and technologies.

The fabrics, of the highest quality and strictly made in Italy, are lightweight, natural, and comfortable, combined into innovative compositions that provide absolutely new tactile and visual sensations. Not only linen, not only cotton, but also cashmere and especially silk in satin and chiffon workmanships to make each garment even more sought-after and to ensure the best possible conditions for an ideal sleep. 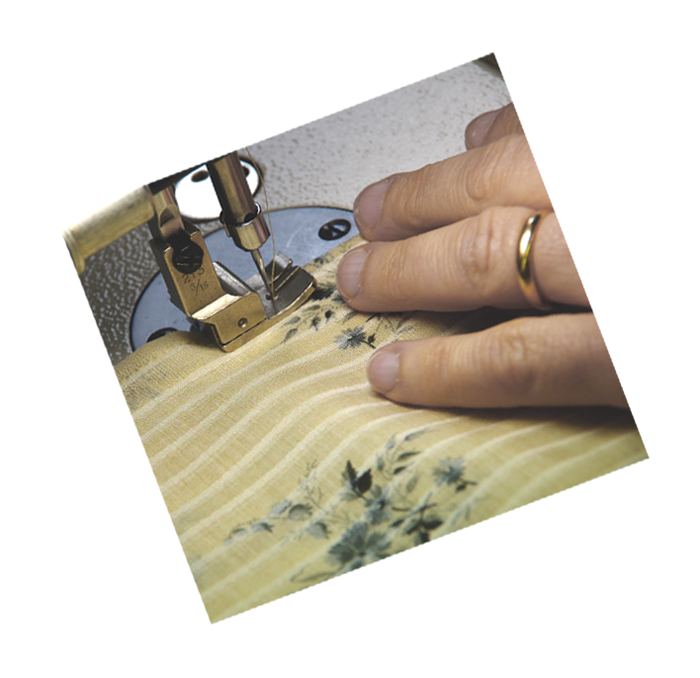