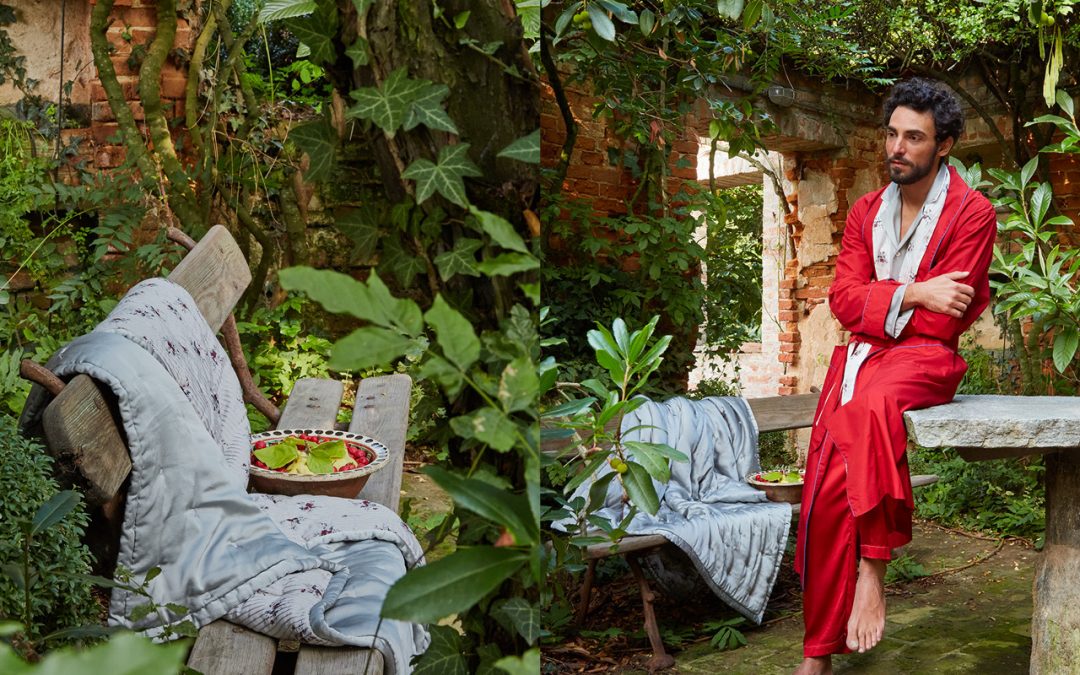 Olga Frua introduces her flowers sailing under the moon.

Florence, June 13th– 16th.  Moon Garden is the new summer garden of Olga Frua, an oasis in the middle of the night that is only accessible to bold travellers. The “limited edition” capsules are the place where the most fascinating male side sprouts: the passion of newly discovered flowers, printed in colonial colours, the softness of embroideries reminiscent of luxuries from days of yore, the genuineness of natural fabrics full of harmony!

The flowery branches of the mimosa tree, recently found in Olga Frua’s bookcase, can now be seen embellishing the piratical-looking pyjamas made of cotton voile: the shirt features a looseness recalling the irreverence of a wave, while the trousers offer the versatility of a pass-partout. The silk version in the tobacco variation takes on a radical chic look, perfect for a boarding in a full moon night!

Olga Frua plays on colours, resuming in a new light the dyes of the old family printworks, De Angeli Frua in Milan, namely Indigo Blue and Adrianople Red, plain colours so manly that they were almost inimitable in the early 20th century, accompanied by a contemporary palette of pink, amaranth, night blue, tobacco, and opal.

Lit by the moon, plant materials, namely flax and cotton, show up clearly, captured by Olga Frua in their purity or mixed with the most valuable silk to enchant even the most exacting ones: an irresistible mix and match, to a true Ars Dormiendi.

The rough freshness of linen meets the refined softness of silk in the nightshirt, which also becomes a caftan perfect for the sun, for freedom in nature. Its line is inspired by the middle-eastern tunic, with an essential, yet sophisticated and unique style, thanks to the chain-stitch embroidered name: EXTRA FINE, SUPREME, customization TO THE HIGHEST DEGREE.

So charming when they are wrinkled, Olga Frua‘s sartorial pyjamas are rich in details, like a seducer’s summer nights. Worn open, with the hands in the pocket, they reveal the skin tan, the contrasting profiles, the magic number of the coated buttons, the tactical drawstring fastening. For those who are really “experienced”, the trousers alone, accompanied by a sleepy look and sculptured abdominals, work both after sunset and under the languid morning sun, while still dreaming, soon after awakening!

Finally, it will really feel like flying in the “Sky, Painted Blue”, under the stars, wearing the elegant lightness of the bathrobe-dressing gown. Perfect for relaxation, sleep, summer, boat, beach, and water. Moon and sea meeting on the horizon line: a red profile follows the soft shape of the shawl collar and the geometries of the pocket flaps and sleeve cuffs. Afiery thrill to honour Olga Frua‘s masculine energy and cultivate dreams under the moonlight in the secret garden of the night.